This week I am sharing a white paper written by AIIM International, the leading association covering the ECM industry, titled Automating AP/AR Financial Processes – User feedback on the real ROI written by Doug Miles, their head of market intelligence. Accounts Payable (AP) and Accounts Receivable (AR) operations are the engines of most organizations – they control the cash flow. CASNET has been providing solutions to streamline the process back to when microfilm was a legitimate “best practice” in high volume environments. Today, microfilm is rarely used, however the ability to capture images or route electronic invoices has revolutionized the AP/AR function.

Here are some highlights of this informative research:

“Payment systems are the lifeblood of any organization. Without them, suppliers don’t get paid and perhaps even more importantly, money is not collected from customers. Yet surprisingly, they are usually considered to be part of the infrastructure of the business – an unavoidable overhead.”

“…although many organizations have adopted electronic workflow of invoice images – scanned from paper or input as PDF – many are missing the true benefits of capturing the information on the document itself using OCR (Optical Character Recognition) and linking it direct to the finance or ERP transactional system.”

“In this report, we will review how invoice automation is performing in accounts payable (AP), what issues and shortcomings have been experienced, and what financial returns and additional benefits have been achieved by existing users. We will look at the part that wider content management can play to broaden the single-point AP process, and, in particular, how this model brings benefits to the accounts receivable (AR) process. Content management can then be extended to other processes within the business. This report is a follow up to a previous report and survey conducted in January 2012.” 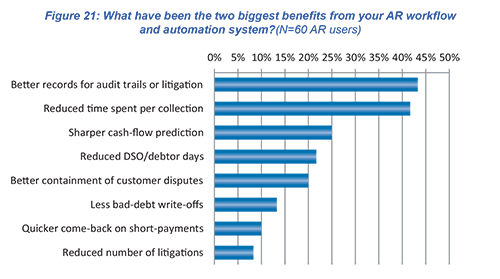 To learn more about how your organization can benefit from our experience, please contact us now!